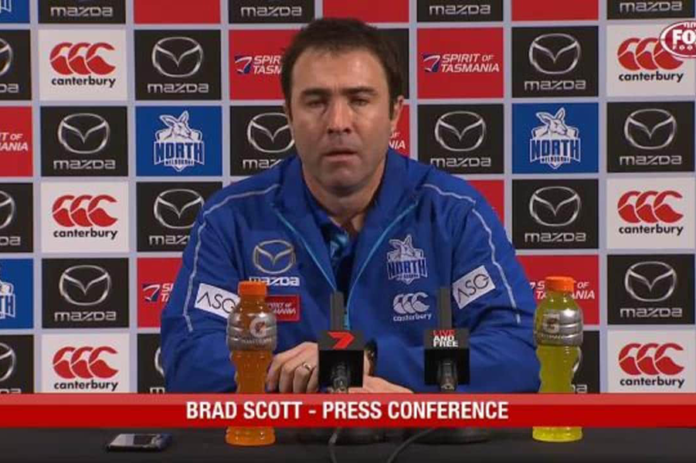 “It’s really hard to give up something you love” said a clearly saddened Scott.

“Having the opportunity to front the media every week and whinge so virtuously has been more than just a job for me, it’s my passion.

“It can be tough when your team hasn’t legitimately given away a free kick in ten years, and the umpires repeatedly pay them against us, but whinging comes easily to me.

“That’s what I’ll miss, but unfortunately the job also requires me to coach a football side, and that’s really taken the fun out of it for me”.

Despite sitting second last on the AFL ladder before this weekend, Scott insisted that the decision for him to leave was made mutually between he and the club.

North Melbourne supporters are reportedly split about the abrupt change, with it believed that exactly 50%, or nine members are of the opinion that Scott should have stayed, while the other nine are happy to see him go.

Scott has also categorically denied that he’s in contention for the vacant South Bendigo under 9s coaching position.

While it’s alleged that Scott was very interested in a potential salary increase when compared to what the cash-strapped Kangaroos were paying him, a spokesperson for South Bendigo has confirmed they’ll be going in a different direction.

“After careful analysis of his coaching career, we’ve mutually agreed that Brad might not be ready for this kind of a role just yet” the spokesperson told Seems Legit.